This article will help you understand:

What parts of the elbow are affected? 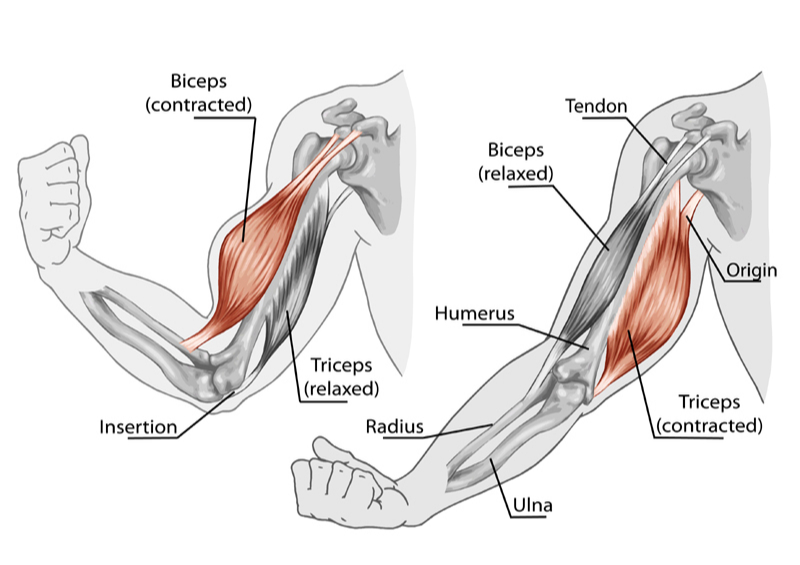 Tendons are made up of strands of a material called collagen. The collagen strands are lined up in bundles next to each other.

Because the collagen strands in tendons are lined up, tendons have high tensile strength. This means they can withstand high forces that pull on both ends of the tendon. When muscles contract, they pull on one end of the tendon. The other end of the tendon pulls on the bone, causing the bone to move.

Contracting the biceps muslce can bend the elbow upward. The biceps can also help flex the shoulder, raising the arm up. And the biceps can rotate, or twist, the forearm in a way that points the palm of the hand up. This movement is called supination. Supination positions the hand as if you were carrying a tray.

Why did I develop a rupture of the distal biceps?

The most common cause of a distal biceps rupture happens when a middle-aged man lifts a box or other heavy item with his elbows bent. Often the load is heavier than expected, or the load may shift unexpectedly during the lift. This forces the elbow to straighten, even though the biceps muscle is working hard to keep the elbow bent. The biceps muscle contracts extra hard to help handle the load. As tension on the muscle and tendon increases, the distal biceps tendon snaps or tears where it connects to the radius.

When the distal biceps tendon ruptures, it usually sounds and feels like a pop directly in front of the elbow. At first the pain is intense. The pain often subsides quickly after a complete rupture because tension is immediately taken off the pain sensors in the tendon. Swelling and bruising in front of the elbow usually develop shortly after the pop. The biceps may appear to have balled up near the elbow. The arm often feels weak with attempts to bend the elbow, lift the shoulder, or twist the forearm into supination (palm up).

The distal biceps tendon sometimes tears only part of the way. When this happens, a pop may not be felt or heard. Instead, the area in front of the elbow may simply be painful, and the arm may feel weak with the same arm movements that are affected in a complete rupture.

How can I be sure that I’ve ruptured my distal biceps?

An early diagnosis is best. If surgery is needed, people who’ve ruptured their distal biceps tendon usually have better results when surgery is done soon after the injury.

When you first visit Physioflow Physical Therapy, our Physical Therapist will take a detailed medical history. You will need to answer questions about the mechanism of injury, your pain, how your pain affects you, your regular activities, and past injuries to your elbow.

The physical exam is often most helpful in diagnosing a rupture of the distal biceps tendon. Our Physical Therapist may position your elbow and forearm to see which movements are painful and weak. By feeling the muscle and tendon, we can often tell if the tendon has ruptured off the bone.

Some patients may be referred to a doctor for further diagnosis. Once your diagnostic examination is complete, the Physical Therapists at Physioflow Physical Therapy have treatment options that will help speed your recovery, so that you can more quickly return to your active lifestyle.

At Physioflow Physical Therapy, when we treat a ruptured biceps tendon nonsurgically, we generally advise that you avoid heavy arm activity for three to four weeks. As the pain and swelling resolve, it will become safe to begin doing more normal activities.

Our nonsurgical measures may include recommending a sling to rest the elbow. Anti-inflammatory medicine may be suggested to you by your doctor to help ease pain and swelling and to help you get back to activities sooner.

If the tendon is only partially torn, recovery takes longer. Our patients usually need to rest the elbow using a protective splint or sling. As symptoms ease, you will usually begin a carefully progressed rehabilitation program under the supervision of our Physical Therapists or occupational therapists. The program often involves one to two months of therapy.

When recovery is well under way, your regular visits to Physioflow Physical Therapy will end. Although we will continue to be a resource, you will eventually be in charge of doing your exercises as part of an ongoing home program.

Rehabilitation takes longer after surgery. Immediately after surgery, your surgeon may cast your elbow for up to six weeks. Some surgeons prefer to use a special range-of-motion brace with careful elbow motion starting within one to two weeks. When you begin your post-surgical Physical Therapy at Physioflow Physical Therapy, our first few sessions may involve ice and electrical stimulation treatments to help control pain and swelling from the surgery. Our Physical Therapist may also use massage and other types of hands-on treatments to ease muscle spasm and pain.

We will then gradually have you start exercises to improvement movement in the forearm, elbow, and shoulder. You need to be careful to avoid doing too much, too quickly.

Exercises for the biceps muscle are usually avoided until at least four to six weeks after surgery. Our Physical Therapist may begin by having you do light isometric strengthening exercises. These exercises work the biceps muscle without straining the healing tendon.

At about six weeks, you may be able to start doing more active strengthening. As you progress, our Physical Therapist will teach you exercises to strengthen and stabilize the muscles and joints of the wrist and hand, elbow, and shoulder. We may recommend other exercises to work your elbow in ways that are similar to your work tasks and sport activities. Our Physical Therapist will help you find ways to do your tasks that don’t put too much stress on your elbow.

Although the time required for recovery is different for every patient, as a guideline you may require therapy for two to three months. It generally takes four to six months to safely begin doing forceful biceps activity. Before your Physical Therapy sessions end, we will teach you a number of ways to avoid future problems.

When evaluating your condition, your doctor may order X-rays. X-rays are mainly used to find out if there are other injuries in the elbow. Plain X-rays do not show soft tissues like tendons. They will not show a distal biceps rupture unless a small piece of bone got pulled off the radius as the tendon ruptured. This type of injury is called an avulsion fracture.

Your doctor may also order a magnetic resonance imaging (MRI) scan to see if the biceps tendon is only partially torn or if the tendon fully ruptured. An MRI is a special imaging test that uses magnetic waves to create pictures of the elbow in slices. The MRI can also show if there are other problems in the elbow.

Many doctors prefer to treat distal biceps tendon ruptures with surgery. Nonsurgical treatments are usually only used for people who do minimal activities and require minimal arm strength. Nonsurgical treatments are only used if arm weakness, fatigue, and mild deformity aren’t an issue. If you are an older individual who can tolerate loss of strength, or if the injury occurs in your nondominanat arm, you and your doctor may decide that surgery is not necessary.

Not having surgery often results in significant loss of strength. Flexion of the elbow is somewhat affected, but supination (which is the motion of twisting the forearm, such as when you use a screwdriver) can be very affected. A distal biceps rupture that is not repaired reduces supination strength by about 50 percent.

People who need normal arm strength get best results with surgery to reconnect the tendon right away. Surgery is needed to avoid tendon retraction. When the tendon has been completely ruptured, contraction of the biceps muscle pulls the tendon further up the arm. When the tendon recoils from its original attachment and remains there for a very long time, the surgery becomes harder, and the results of surgery are not as good.

In a direct repair, the surgeon begins by making a small incision across the arm, just above the elbow. Forceps are inserted up into this incision to grasp the free end of the ruptured biceps tendon. The surgeon pulls on the forceps to slide the tendon through the incision.

Attention is given to the free end of the tendon. A scalpel is used to slice off the damaged and degenerated end. Sutures are then crisscrossed through the bottom inch of the distal biceps tendon.

The original attachment on the radius, the radial tuberosity, is prepared. An instrument called a burr shaves off the surface of the tuberosity. The burr is then used to create a small cavity in the bone for the tendon to fit inside. Three small holes are drilled into the top of the rim of bone to secure the sutures.

The tendon is passed between the radius and ulna, exiting through the second incision that was made on the back of the forearm. The sutures are threaded into the three holes that were drilled into the rim of the radial tuberosity. The surgeon ties the sutures, securing the newly reattached biceps tendon. When the surgeon is satisfied with the repair, the skin incisions are closed, and the elbow is placed either in a cast or a range-of-motion brace.

If more than three or four weeks have passed since the rupture, the surgeon will usually need to make a larger incision in the front of the elbow. Also, because the tendon will have retracted further up the arm, graft tissue will be needed in order to reconnect the biceps to its original point of attachment on the radial tuberosity.

The surgeon begins by making a curved incision across the arm, just above the elbow joint. The incision curves along the front surface of the upper arm to expose the lower part of the biceps muscle.

The surface of the radial tuberosity is removed. A burr is used to create a small cavity within the tuberosity. Several suture holes are drilled around the rim of the tuberosity.

The surgeon then prepares a graft of tissue to lengthen the retracted biceps tendon. Some surgeons use a piece of hamstring tendon for the graft. Others use a section of the Achilles tendon where it attaches to the heel. This type of graft is usually an allograft, meaning that the tissue is taken from a cadaver (human tissue preserved for medical purposes).

When the Achilles tendon allograft is used, the surgeon leaves a small piece of the heel bone attached to the piece of tendon. Small holes are drilled into the piece of bone. Sutures are woven through these holes and will later be used to secure the end of the graft to the radial tuberosity. In this way, the graft will have a bone-to-bone connection that heals together. The healed bone solidly fixes the the graft to the radial tuberosity. After the graft is in place, its top end is then stitched over the front of the biceps muscle.

Next, the lower end of the graft is passed between the radius and ulna, exiting through the second incision that was made on the back of the forearm. The sutures from the bony end of the graft are threaded into holes that were drilled into the rim of the radial tuberosity earlier. The surgeon ties the sutures, securing the graft to the radius.

When the surgeon is satisfied with the repair, the skin incisions are closed, and the elbow is placed in a protective brace.